A pair of Royal Vandagyres are a late addition to Discovery of Meridell Day! Both these colours are now active: 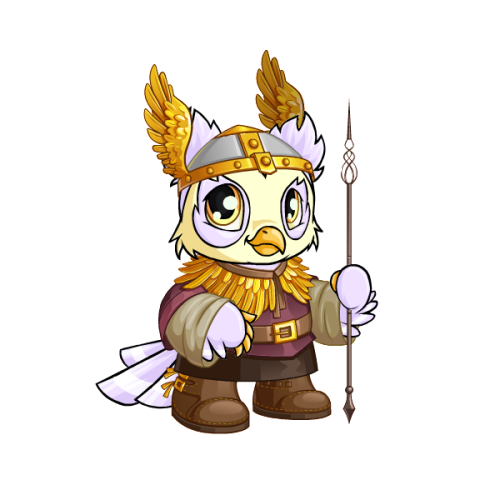 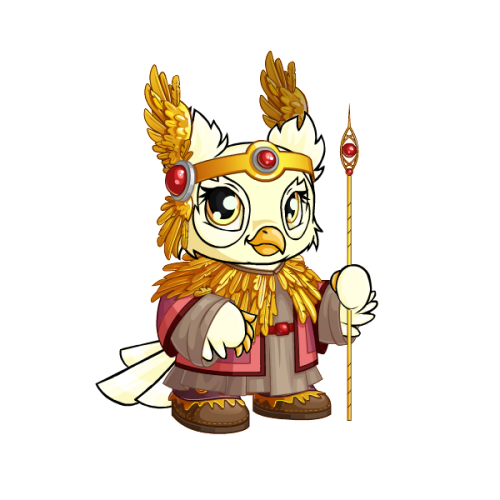 There are 40 comments below. Add yours!

*Ride of the Val-Kyriis plays*

Very cute! I wish the base lineart and the clothing lineart meshed together a little better, though.
by coryldork on August 2, 2022 4:05 PM NST

@coryldork - I agree, the colors of the clothing are not contrasty enough and look a bit washed out. I also dislike both staves, but I wouldn't likely use them much anyway.
by mavegibson on August 2, 2022 4:40 PM NST

Yay! A cute color that I can't even use as I can't reset my password.

Something is off about the helmets. Must be the perspective again. Other than that, neat colour. Not necessarily as royal-looking as other colours, but still cool in its own right.

Judging by the comments I'm guessing I'm missing something... And as someone who doesn't get the reference(?) I'm pretty disappointing by these. At least the male has a decent base color I guess.
by biediep on August 3, 2022 12:11 AM NST

@biediep: I think they went for more Nordic "royalty". You know.. viking stuff. Of course the old Norse usually didn't have actual kings, but rather a chief if I am not mistaken.

Actually there were scandinavian kings during the viking age. If you read some of the Icelandic sagas you will see that vikings would bring tribute back to the king in exchange for land, titles and preferment.
by recklesse on August 3, 2022 9:14 AM NST

I had planned to paint for the clothes but now that I know the necklaces are attached to the shirts, I guess I'll pass...

Also, you can't wear a wig with either of the helmets/headdresses.

Why can Vandagyres never get the best artists to do their colors?

I definitely wish the outfits and colors meshed together better. I think it's the black lineart on the Vandagyre compared to the thin, colored lineart of the outfits. They look like outfits made with a totally different color in mind, not a matching set. The outfits and colors independently still look cool, though.
by xxstarl1ghtxx on August 3, 2022 4:54 PM NST

@recklesse: Thank you for correcting me. Was I at least correct in stating that villages were less concerned about their monarch than their chief?
by apophis324 on August 4, 2022 12:13 AM NST

The male version has a yellow on it's face that is supposed to be pink like the rest of his body. The female version is yellow, but somehow the female face made it to the male versions face. Am I making sense? Does anyone else see that?
by potential_ruler on August 4, 2022 8:03 AM NST

The male version has a yellow on it's face that is supposed to be pink like the rest of his body. The female version is yellow, but somehow the female face made it to the male versions face. Am I making sense? Does anyone else see that?
by potential_ruler on August 4, 2022 8:03 AM NST

@potential_ruler: You mean to say that the Royal Boy Vandagyre has purple accents in its coat while the Royal Girl is all yellow, right? Yeah, we see that. If I were to assume, I'd say that's because in the world of birds it is often the male that's more fancy-looking than the female, as it's a male's duty to attract females.
by apophis324 on August 4, 2022 8:50 AM NST

@Why can Vandagyres never get the best artists to do their colors?
--

Also Toy Vanda is surprisingly popular even being so creepy... but then again, Furbies were creepy.
by ducky on August 4, 2022 11:51 AM NST JN Staff

@apophis324 Not quite! The male version has the female coloring on its face. There should be no yellow on the male, right?
by potential_ruler on August 4, 2022 1:11 PM NST

@ducky - OK I admittedly am also thinking of a lot of the pet-specific clothing, which has been disappointing, but to me the zombie was a hot mess, the mutant was disappointing, cammo was terrible (what a missed opportunity to do something cool with an owl), desert was as washed out as this royal color is, the spotted was a nice concept but had a very Pollockian execution, I was not a fan of Tyrannian either, baby is awkward and goofy in a bad way... even the chocolate one wasn't great, as the color was not rich or chocolately enough, and came out very reddish.

I will concede that we also have some of the best-drawn colors on the entire site, though. The robot, faerie, Christmas and toy are all probably the best example of each of those colors AFAIAC. But it only makes the poor colors stand out all the more.

I think another element of this is that the vandagyre is so new, so we have very few colors to choose from and every new color feels more high stakes for me than it might normally.

I totally disagree about the vandagyre and customization. I know a lot of people feel it's not a good shape for customizing, but I quite like it. It actually has a cute Petpet Park style (throwback!) appeal to it for me. There is a weird perspective thing happening with the head that makes a lot of wigs look bad on it, and the right arm is so thick that a lot of jackets and shirts don't work, but not to where I think it's a major issue. Every pet, no matter how amazing they are to customize, has some issues (kacheek feet, anyone?).

I was excited about this color until I took a closer look, but now I just feel devastated that this is the royal we get. There is so much potential with royal, what a huge disappointment.
by mavegibson on August 4, 2022 4:19 PM NST

@ducky - OH, I just realized I misunderstood what you said. You were saying that the Tyrannian vandagyre is awkward, not the entire species. I completely agree.
by mavegibson on August 4, 2022 4:22 PM NST

@potential_ruler: Oh you mean that the Royal Boy is all pink except for the face? I don't know, I think that's a decent artistic choice, especially since it links them more to their female counterpart. But I wasn't in charge of making this, sooo...

Not going to lie part of me wishes the royal girl vandagyre’s headpiece didn’t have those wings on the side, because it would look almost exactly like the Dragon Quest 3 hero’s headpiece.
by cat on August 5, 2022 2:21 PM NST